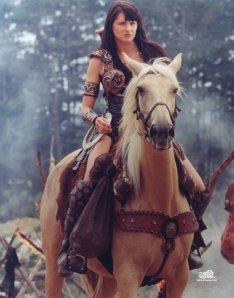 Ever notice, that as much as we’d like to be in control as proper feminist women, our emotions undermine us.  We go all soft and queasy imagining seductions that sweep us off our feet.   Disapproving though I am, of the institution of marriage and commitment, a sly self within me longs for sexual seduction replete with monogamous fucks.  Yes, my suspicions about human sexuality cast aspersions on women (and men) in committed relationships.  For that, please bear with me– my inner woman often sits and watches for a white knight to ride by (although the knight is sometimes a tough femme in kickass boots and tats, think Xena, Warrior Princess).  My inner woman seems in league with a world that’s in the process of institutionalizing gay couples whom marriage (and tax benefits) makes safely monogamous.

Tucking the fantasist firmly back in place, I put on my glasses (varifocal, naturally) to examine the world at large.  Wherever I turn, consumerism/ media/ capitalism marches hand in hand with indiscriminate sexual desire.  Looking at ads, even rifling through the newspaper, I wonder if sexuality is the underlying thrust (deliberate patriarchal metaphor there) to global markets.  There’s always a new and better model in the works, coercing us into wanting, wanting, wanting in an endless frenzy of desire.  Undiscovered gadgetry awaits us–cars, mixies, make-up, homes, vibrators.  In the name of adventure and getaway, as a reward for labor through the work year, we colonize remote cultures and beaches.  All is tech and tourism. 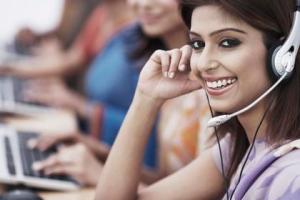 We in the ‘third world’ have been blessed–we have been outsourced to.   So, to deal with Western customers, the Indian young learn to speak English with an American accent (not, however, with much grammar) to counsel the first worlders about gadgets and money instruments.  An Indian accent will not do in such scenarios:  along with jobs, and money, the young mold themselves into capitalist globetrotters.  They leap easily over oceans and histories.  Driving into Bangalore every other month or so, I marvel that the States I left in the mid-nineties has come back to haunt me in 21st century India.

Speaking for myself, I can only eat so much, play so much, fuck so much, before my appetite is sated and I turn jaded.  Some days food tastes like sawdust in the pizzerias and chi-chi restaurants of Bengluru.  The name has turned indigenous, if the city has turned mongrel.  ‘Bangalore’ the garden city of the Brit colonizers, has now become the concrete city as a taxi driver informs me in pidgin, English-Kannada mix.  We’ve recovered from the British and the thrall of white civilization only to fall prey to the racism-s and attendant -isms of making money.   Lightening our melanin [http://en.wikipedia.org/wiki/Human_skin_color] tainted skins, underarms and vaginas, Indian women fall into the arms of MNCs (Vichy, Dove, Unilever, to name only a few).  [http://jezebel.com/264396/indian-women-whiten-their-skin-fight-the-patriarchy]  Shonit Biswas 1 year ago, comments, “such sexy milky, creamy, smooth, armpits…wanna lick them for hours”  Viscerally offputting remark, yes, but common sentiment voiced by young Indian men,  typical consumers of the marketed white flesh available everywhere.

As a grad student in the States, I came acrosss Luce Irigaray, feminist philosopher.  [http://www.britannica.com/EBchecked/topic/294014/Luce-Irigaray]  Reading her writings, my anger took visible shape as a Feminist.  In the binaries of patriarchal thought, white=value=rational thought=male.  Even in casteist India today, the upper caste boasts of fair skin, and lower castes are consigned to  blackness. [see discussions here– http://www.patheos.com/blogs/drishtikone/2012/04/varna-caste-system-and-skin-color-shallow-understanding-and-dubious-arguments/ and http://historum.com/asian-history/18145-were-indian-castes-based-racism-skin-color.html%5D   Perhaps today, wealth is an efficacious skin lightener, a class marker that recasts caste!

If we reflect on the binary logic of most contemporary languages and cultures, white=sun=day=virtue=light=male, and black=earth=night=sin=dark=female. Although, Irigaray sees the binaries working through Western philosophy, I find the same logic operating through contemporary Indian thought and custom.  Linked by media and market value, pretty similar logic works through different nations on various levels, although inflected by particular histories and cultures.  Its a small, small world–dictatorships, capitalists, socialists, democracies–bound together by MONEY.

The Hindus, for example, bow down to the Sun god, perform elaborate ritual namaskars, or prostrations, in His praise, and deny the Goddesses of earth and night.  [http://www.shantiyoganola.com/sun-salutations-the-meaning-of-surya-namaskara/]  In the Ramayana, sacred Hindu epic, Sita the virtuous queen–abducted by a demon and released, presumably unravished–finally retreats to the maternal bosom of Goddess Earth, in revolt against the aspersions cast on her chastity.  [I link here to Namita Gokhale‘s thoughtful analysis of the role of Sita as virtuous wife for any reader interested in that mythic Indian wife: http://namitagokhale.com/sita.html.]  For the chaste queen, the only way out is a descent into earth and darkness.

As I sit here to type my disquiet at Indian patriarchy,  I look about me.  Men charge around the ashram dressed in whites, women sport colorful saris.  Where is virtue vested, in these sartorial symbols?  My own androgynous Merlin, my Swami suggested that darkness begat light, and not the other way about. Darkness, he hinted, encompassed all, even light nurses a seed of darkness. In my past hours of meditation, dark beckoned to me: I concentrated on following thought until I thought no more, encompassed in the warmth of godly dark.  Only Swami made sense of my attraction to the dark.

If in the binaries of logic, then, one side is devalued, must it be the associations of the feminine?  Women in the real world often embrace male rationale, rise to power, become leaders in politics, industry, commerce, or academia: Indira Gandhi, Margaret Thatcher, Indra Nooyi of PepsiCo, Sheryl Sandberg of Facebook.  [see for eg.–http://www.nypost.com/p/news/national/women_worst_enemy_sjGvDqEhR54DfmBOsMLc9K]  And men may, in their way, reclaim the feminine, my own Merlin for example.  Our genders are fluid, shaped by our selves and our particular histories, even if our physical bodies are sexed.   So, my love of the dark womb of the earth, the vast black of Space and goddess,  must subvert the masculine–the bold seductions of consumerism, of phallic sexuality and its institutions.  Where am I headed, then? 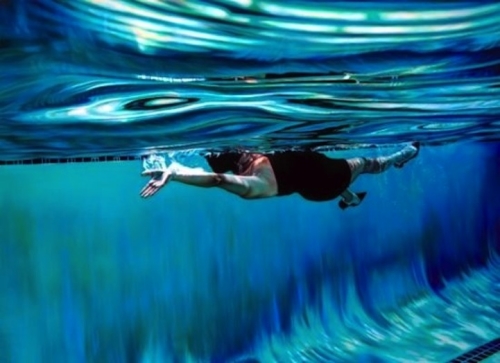 “In and Under Water” painting by Ana Teresa Fernandez

O, but that’s a question based in the logic of patriarchy.  I refuse to journey from point B to point A, to climb higher, to progress to a GOAL….  I move in circles, I travel in mazes, I let darkness enclose my steps, I cannot know where the goddess goes.  She presses my hand, I tremble with fear and joy, I live–and, I wait to die into the dark.